William Irwin Thompson: At the Edge of History 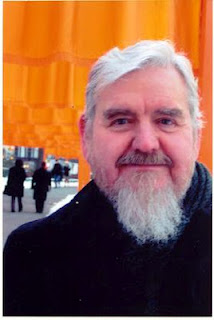 In the late sixties William Irwin Thompson was professor of humanities at Massachusetts Institute of Technology. It seems that MIT’s image makers wanted a tame humanities department to act as window dressing that would help humanize and soften the stark lines of their “Hard Science” modernism. But in Thompson they got more than they bargained for: This was a man who was acutely aware of the deep existential angst that so often accompanies the science and technology driven industrialised West, an angst that in good part is down to the world view paradigms that are too easily assumed to go together with a technoscience based society. Using some first rate wordsmithing Thompson turned on his employers with very biting criticisms. But then what did MIT expect? As a cultural historian Thompson’s area of expertise, by definition, is criticism and so MIT got what they paid for; they employed a cultural critic and they got a cultural critic – with a vengeance. They could hardly expect Thompson to respond with a belly-up acquiescence to the epistemic exclusivism that is the habit of mind of many an aficionado of the hard sciences.

At the beginning of the 1970s Thomson published At The Edge of History, a book I have recently read. It is the story of Thompson's reaction to his experiences at MIT. Much of the material in At the Edge of History deals with the subtle existential difficulties many Westerners have in coming to terms with technological society and the crisis of meaning that the revelations science bring; this is subject matter that is very much a theme of my blogs. Thompson is one of those thinkers who takes in the whole of sweep of reality and paints a breath taking broad brush picture of the vista he sees. It’s a sobering the fact that Thompson was writing this kind of stuff when I was only just out of shorts and still thought that science was all about space travel.

Perhaps I find Thompson just a bit too New Agey to connect with his aspirations and tastes, but he is so perceptive and expresses things so well that I found myself underlining much of what he had written. Below are some passages that stood out for me, particularly passages to do with that pervasive theme of my blogs: Technoscientific angst.

Page 63: The new paradigm alienates: In the seventeenth century we took a turn into what Alfred North Whitehead calls “scientific materialism” and introduced a whole new readjustment of the mind’s relationship with nature; now the effects of that readjustment are becoming visible, tragically visible.

Page 65: Feeling vs. Mechanism: When men are trained to strive for power over their environment [via science and technology], they are socially constrained to achieve that success through suppression of consciousness in which ambiguity, complexity, feeling, intuition and imagination are dismissed as irrelevant distractions….. And this is what “the aerospace syndrome” is all about. Operating with a strictly logical and mechanistic model of self, MIT training reduces the self’s truly complex nature to a few relatively standard industrial functions.

Page 70: Phallic science rapes nature: And what the adolescent engineer rehearses in miniature in his fantasied relations with women, he is even freer to do at large with nature, for the instinctive play of our technology is the exploitation of passive, female nature in a celebration of power and phallic dominance. In keeping with this sexual mythology of rational male dominance over irrational female nature we have constructed an ideology of progress that places our industrial culture at the pinnacle of human civilization.

Page 75: Mystical “Pythagorean science” is Thompson’s ideal: We somehow have to outflank the ignorant armies of the Left and Right to find the space and time to convert out industrial technology to new kind of Pythagorean science.

Page 79: Our humanity is reasserted and expressed through the overtly palpable and sensual: In the face of the machine, man now affirms his humanity in nudity, sexuality, and the polymorphous sensuousness of Esalen.

Page 84: Modern science’s mechanistic reductionist hegemony: If at MIT biology is molecular, psychology is the physiology of the brain, and political science is computer generated biostatistics, then it follows that if the humanities and arts can show imaginative ways of giving up their atavistic inclinations, funds will be found to turn philosophy into information theory, history into the comparative modernization of the Third World, and literature into linguistics.

Page 128: Freak out as luddites or become initiates who unite mythos and logos: When information is so immense that man cannot keep up with it and still be purely rational, he has a choice: he can freak out and become tribal again to attack the old naïve rational values in the guise of a Luddite-student; or he can effect a quantum leap in consciousness to re-vision the universe….re-vision the universe in the mystical, mathematical, and scientific foms of the new Pythagoreanism….

Page 132: Thompson’s New Age Drift: But at the beginning of Phase IV it is all the triumph of the Pythagorean, the Scientist-Shaman of the Aquarian Age….

Page 144: On Fundies vs. Liberals: The liberal feels that liberal values will become increasingly triumphant; the powerless fundamentalist feels that apocalypse will tumble the proud and mighty into the dust, and that he will be found living in the truth.

Page 147: Techno-liberalism is totalitarian:….one can make a much stronger case that it is the Technological society that is totalitarian, for it reduces all cultures to mere ideological impediments to the advance of “rationalization”. Technology is “total” because it sees everything other than itself as reactionary, irrational, and primitive.

Page 159: Lewis and Tolkien attack technology: Lewis’ and Tolkien’s Oxford attack on the modern machine age is not novel, but it is subtle and clever. By saying in effect, “Of course, all this is rubbish and nonsense, but it is entertaining,” they can sneak unnoticed into the iron palace of technology.

Page 165. Thompson and Evolution. Prior to this page Thompson discusses some “heretical” theories like Atlantis and catastrophism and then we read this: I remember how startled I was in 1967 when Professor Robert Ockne told me he did not accept the theory of human evolution as proved because he thought it was an enormous overgeneralization on very fragmentary data…..I was very surprised because I always thought, without question, that only ignorant hicks from the south or Jehovah’s Witnesses questioned the theory, and since I saw myself as definitely on the side of science against orthodox religion, I positioned myself in the matter without a thought for what was really only a matter of snobbery.

Page 169: On Imagination vs. Reason: Had the mystical and Pythagorean nature of pure science not been vigorously suppressed in favor of a scientized political ideology, men like Tennyson might not have had to tear themselves apart over the supposed conflict between visionary experience and reason.

Page 170: On Mythology: There is indeed a “mythopeic mentality”, but it is not restricted to precivilised man, but is to be found in geniuses as different as Boehme, Kepler, Blake, Yeats, Wagner, Heisenberg, and that student of Boehme’s theory of action and reaction, Isaac Newton. Myth is not an early level of human development, but an imaginative description of reality in which the known is related to the unknown……{then follows a definition of myth}

Page 182 Balancing criticism and imagination: Between the cracked-open minds of the enthusiasts of lost tribes, lost continents, and flying saucers and the firmly shut minds of the scholars, it is a very difficult to find a healthy way of using one’s head. ….The double-bind was as true of scholarship as of politics: one purchased imagination at a cost of discipline; a disciplined imagination was a contradiction of terms.

Page 189: Thompson and Maverick science: Thompson is favourably disposed toward alternative “Atlantean” histories and thinks we may be due for a paradigm shift here: All in all, when one takes into account the problems that are not honestly faced and questioned in our notions of evolution, primitive culture, and archeology, one can see that the specialists of what T.S. Kuhn would call “normal science” are retreating from the “anomalies” and burrowing more deeply into the security of the minutiae. If one lifts one’s gaze to take in the whole historical horizon of man, as now only an amateur or a non-specialist can, one can see that once again we are entering an era of scientific revolution with its sudden shift in paradigms. [or perhaps not yet – that was written about 40 years ago]

Page 189: Monsters from the id: The liberal humanists dread the collapse of their world structure with some reason, for if progress and materialism have made technology possible by ignoring all the other subtle forces in nature, then the death of materialism will open man up to beasts and demons he has not feared since the middle ages. …..Already the hippie dropouts from the universities and high schools are becoming caught up in black magic, sorcery, and the crudest forms of occultism…Charles Manson….

Page 200 The “cargo cult” is a universal template: The universal cargo cult takes in the multitudes, from Oxford professors like Lewis waiting for Christ to invade, through [Arthur C] Clarke and his followers, to Mixtec Indians, looking for Apollo II and remembering their Ancient gods from the sky. And even the Russians have held conferences on extraterrestrial civilizations and begun to wait, with Mick Jagger, "for something to come out of somewhere".

Page 201 The angst of the Cosmic perspective: The film [2001 space odyssey] itself is the perfect American irony: a gadget-filled, special effects ode to technology is at once a requiem to all technology. The very movie [2001 space odyssey] that dazzles us with all its tricks is the movie that shows how trivial all these toys are when set upon the cosmic scale.

Page 205: Myth is the/a paradigm of the impending New Age: Birth and death are ultimately confusing; to make sense of them we will have to make our peace with myth…. At the edge of history, history itself can no longer help us and only myth remains equal to reality.

Email ThisBlogThis!Share to TwitterShare to FacebookShare to Pinterest
Labels: Philosophy

I have read all of William's books. In fact he is one of my very favorite authors.

I would especially recommend his book Coming Into Being - Artifacts and Texts in the Evolution of Consciousness. A book which makes all of the usual ideas about human culture essentially obsolete - whether so called theological, or secular.

Can you use a nome de plume so I can tie together all your comments?

Hhhmmm... I had a hunch you might have a connection with William Thompson! I have had that story on William Thompson in abeyance for some months, and only now decided to run it! Synchronicity?

...and thanks for the book recommendation. I've only read "At the Edge of History" and "Passages about Earth". I liked Thompson's attitude and many of his sharp insights